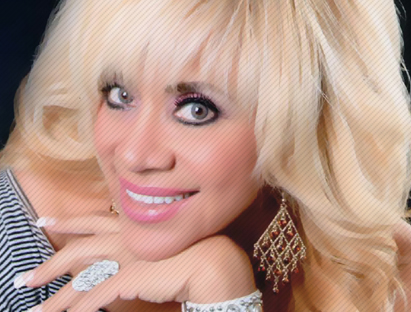 Award-­‐winning singer/songwriter/radio hostess, La Leona, brings her charisma and talent to Univision Television with a new talk show aimed at elevating the Hispanic Community. Los Angeles, CA-­‐February 12, 2013 -­‐ You may not know her name (yet), but you’ve certainly felt her presence. Entertainer, La Leona’s voice and lyrics can be regularly heard on multiple TV shows and radio broadcasts, as well as being heard on her radio show “Buso Con El Abuso”, where she has become the voice of and champion to many. Now La Leona’s music and buoyant personality are coming to Television with her new show. Life wasn’t always this glamorous for Connie Blue-­‐Puché aka La Leona. Although she was drawn to the spotlight from an early age, she always understood the hard work and dedication required to get to where she is today. Raised in Mexico until age 11, La Leona came to the United States with a dream…to shine in the entertainment world. As a child, her parents encouraged her natural abilities; so much so, that singing and songwriting soon became a natural way of self-­‐expression. Her early performances in school recitals paved her way into the music scene in the mid-1990s. Since 1990, she has penned a string of hits performed by artists such as Jose Luis Ayala, Charanda Band, Martin Mendez, and many others. She’s successfully released albums through Balboa Records and later, through her own record label, Blue Leona Records. La Leona also helped pioneer the Latin “crossover” market before it was commonplace; translating songs from English to Spanish for major publishing companies, producers and songwriters. Having established herself as a successful radio personality she is now crossing over into TV with the help of the Center for the Cinematic Arts, Inc.

The motivation behind her latest entertainment venture is simple: take a beloved Mexican American radio personality and singer-­‐songwriter, and lend support to the very community that helped her become who she is today. With “La Leona” she has a golden opportunity to make her mark as the voice of the Hispanic community in contemporary American society. La Leona assembled a top creative team to bring her show from conception to realization. Those on the crew include award-winning directors, producers, and other production personnel. Our shows are available on our Vimeo Channel: www.vimeo.com/channels/LaLeonaUSA